This trip was a running of the annual Dinosaur Run that was set up by Ed, @topgeek , but was to be his first on four wheels. A few of us suckers; @Ryanhockey21, @ZigsRig, @Wyatt and myself followed along to explore the NW corner of the state, enjoy good food, and remind Ed just how close he was to the edges.

The proposed route was based on avoiding pavement, previous runs, satellite images and maps. The different colors were for different days/segments.

The characters from left to right; Mike, Ryan, Ed, Wyatt, and Myself

Four of us met on Thursday morning in Empire for breakfast and to start the journey. @Wyatt was finishing up schoolwork and would join us on the road. We started up and over Berthoud Pass, and then gassed up, which would be the first of many times that I would be heckled for filling my extra gas tanks 'down the hill.' But, I wanted to make sure that my new mounts for the extra fuel would work prior to getting out in BFE and launching one through a window.

We made our way west and hit the dirt, stopped by an old homestead and got the history tour updates from Ranger Ed.

We jumped on a second segment of dirt trail and as we neared the end, there was a little water crossing/pond on the right side of the road. The first three of us drove through but the last of us made a big splash, which also pulled him slightly to the right and off the solid ground and onto the soft shoulder, and the shoulder kept sucking his tires which pulled him fully into the water which we later decided may have been a livestock sewage retention pond. Great news though, Ed needed to use his new winch! It was quick work to pull him out of the sloppy goodness, the water came RIGHT up to the corner of his tailgate.

We continued on and met up with @Wyatt who told us that his rig broke down, so he brought his sister's car since she was out of town. J/K, it was his new rig, with lots of mods, but the mods were at home waiting until after the trip. But the purple Grand Caravan of choice was there and ready for the trip... hold the ice, but thankfully the weather and trail choices cooperated.

We continued west with a destination for the evening being a nice yard in Craig where we would hang out with the crazies who were doing the Dinosaur Run on two wheels. We arrived in time for some good food, a quick few rain showers, and conversations about how soupy the trails will be depending on how much rain comes down.

In the morning, Ed woke up sleeping on the ground after his king size 14" self adjusting pillowtop mattress ended up killing the battery in his Jeep and slowly letting him sink to the earth. So after getting him jump started, we went to Walmart where he picked up an elderly friendly "easy up" tent as well as a new camping cot, but not before he caught some ZZZ's to make sure it would work for him.

After that was sorted out, we made our way towards the dirt two tracks that we watched get hammered with rain all night long. And surprisingly it was dry, thanks to some "all natural" chemical they apply to remove all the physical properties of real dirt. The area reminded us of Montana, huge views in all directions around every corner. Antelope would be the squirrels of the trip, they were everywhere.

The Canadian dancing in the streets...

During our stretch on these plains, we saw the regular livestock as well as elk and antelope. I got a lot of practice in with steering with my knee, focusing and adjusting the camera and getting the shot without driving off any cliffs.

And I was able to get some good shots with the new technique...

The antelope was originally on the left side and then found a fence, so Ed slowed down so it could cross and go on its way, which it did. Then it decided to get a little friendly competition and run alongside us. It reminded me of how dolphins follow the boats and play in the wake that the boats create. It continued running alongside us at a further distance for a good amount of time.
Last edited: May 31, 2016

We continued blasting down the two tracks, with Ed getting all giddy over the radio whenever there was grass between the wheels.

It was becoming a common theme for the trip, storm clouds all around us with a sunny spot over wherever we were. I'm not sure of all the different locations we went through since most of it was just some dirt county roads for me, but after we grabbed lunch at a diner, our next section took us on some complete grass roads, and we did get a slight amount of rain and some hail for a minute or two, but other than a few small muddy areas, the deluge of rain in the distance never seemed to wet the trails that we had to travel. We entered the next area that was more of a sandy/tan colored track with no grass and we then found roads that looked dry, but were as slick as ice. You couldn't really see the transition from grip to no grip so we just relied on the "yeehaw" coming over the radio from Ed who was up front. That lasted for a mile or so then it dried up. We crested a hill and saw this... two angry men about to fight in the middle of the desert!

Ed distracted him by yelling "thats a funny place for a piano" and got him stiff right hook and he went down like a sack of potatoes.

Just kidding, turns out they were childhood bunkmates, what a small world.

We continued on and found more grass between our tires.

All was well until we entered (at least I think thats where it began) Dinosaur national monument. Up until that point, we traveled on many roads that were severely rutted from prior mud bogs. But then we started to do a little mud dance of our own. The mud was spread out over a few miles and was sometimes deep, sometimes just really slick. I managed to slide to the outside of a corner, and up the embankment slightly which did a great job of slinging mud pies through my open window into my truck and lap. But we kept our momentum and no recoveries were needed.

Arrived at the Yampa Bench and got a geography lesson from Professor Ed.

We came along a stranded CRV with nobody in it, it had slid off the trail and looked like it had been there for a quick minute. The next morning the park ranger said it had been there for three or more weeks and the guy from Denver still hadn't followed through with plans to come back to get it. But they were going to have it towed soon ($1k tow bill) since it was in a dangerous spot if the trail gets wet.

We arrived at our echo park campground, the views were amazing and we were ready to relax. While halfway falling asleep, I tried for a little night photography. There was no moon light so it was a bit tricky trying to light up the pictures this is the best untouched one.

I went for my usual morning hike to grab some pictures. Our campsite is on the left side of the grassy area in the picture.

We hit the road, climbed out of the "impassable when wet" switchbacks, that thankfully weren't wet, with dark rain clouds in the distance as usual.

@ZigsRig got vengeance on a puddle, and did not need to be winched this time.

A little pavement, which would lead us to the final gas fill up for a while.

We swung by Josie Morris' cabin, and one of the places where she would go to protect herself from indians.
http://historytogo.utah.gov/utah_chapters/pioneers_and_cowboys/josiebassett.html

We arrived at our last campsite at the Gates of Lodore.

The Gates of Lodore

We packed up camp and got on our way. Travelling through a canyon where Butch Cassidy and the Wild Bunch would have been going to or from a "job" was really interesting. Our first "trailhead" we were to turn onto had long been washed away but there were many ways into the trail system. The next section was mostly oil field roads and then we started making fresh tracks out in the middle of nowhere. We encountered a few washouts, one large muddy area but did not have a problem with any of them.

Next we started the climb of Lookout Mountain. It was a good climb and there were some nice tighter high speed sections mixed in! When we reached the peak, we gassed up, grabbed food to eat on the road and headed down the other side.

Shortly after, we finally came across some mustangs that I had been looking for the whole trip!

Our next planned turn looked like something that might take a few extra hours and since we all planned on heading home Sunday night to avoid holiday traffic and get work done on Monday, so we took other county roads that were varying qualities of dirt. The skies looked promising for a natural car wash, but somehow, as with the rest of the trip, we managed to avoid the pouring rain and only caught some wet pavement on I-70.

That was my first time going over Rabbit Ears Pass though, looked like a lot of cool stuff to explore over there!
Last edited: May 31, 2016

Gunsight Pass still looks much like it did 150 years ago.. but the cowboy's horses have changed.

When you left all the parts that turn your minivan into a jeep sitting on the garage floor at home... you need all the love you can get.

First off, thank you @topgeek for putting this together! I’ve been wanting to explore this part of Colorado for some time, but I would never have seen the sights we saw if it wasn’t for your amazing planning (and knowledge of the area)!

Ill start off my report by saying, I take really crappy pictures compared to the guys I was with.


However, I wanted to share my $.02 of what I learned on this trip…


This area is AMAZING! Who knew you could drive so many dirt miles… Ive flown past so much of this while on the highway ignorant of the beauty just behind the hills to my sides. Never again will I be able to take US 40 without looking for “Short cuts”… I think the Blue FJ is still catching up to us (LOL, inside joke)

Also, If @Brandon dares you to drive through a puddle, DON’T! He however, is really good at it!

But if you dare yourself to go where not many have gone, you are rewarded with some AMAZING views!


Watch out for naked sunbathers…

If @topgeek asks you to go out exploring, DO IT! Just make sure that he doesn’t get too close to any edges (this one is for you Ed)

Lastly, Im going to do what I can to keep this place a secret as long as I can so that none of the natural beauty gets disturbed by the “tour-ons”

Thanks again for everything Fellas!!

Has anyone seen Mike? 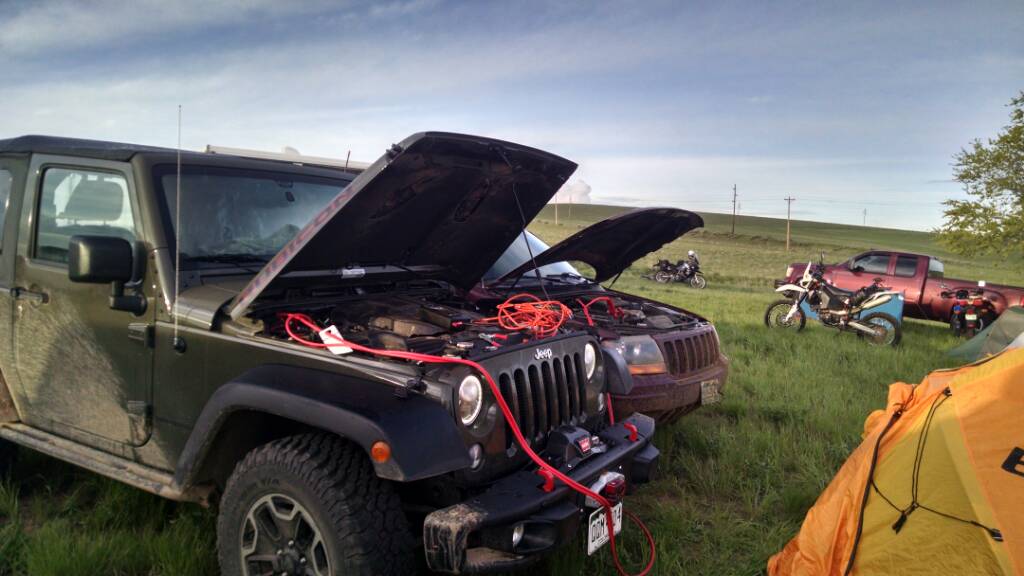 I didn't get too many pictures but I did get a very important one when the minivan saved the day for @topgeek Jeep.

LOL - I figured that photo would turn up
Thanks again for the jump Wyatt!